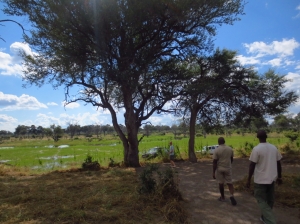 I’m a tree. I’ve been a tree for a long time. I live on the banks of the Khwai River. It is a peaceful spot and I am tall enough to see a good distance all around. I have a couple of close companions, the Shepherd’s Bush tree has entwined her branches with mine, and a little distant from us is my sister. She got hit by lightning and almost died, but she is managing to produce some branches and leaves at last.

About ten days ago strange happenings got us all talking. The men who patrol this place arrived and began to clear the grass. We had never seen such a thing. In places they pulled it out by its roots, leaving the earth bare and unprotected. And then they cut a section, making it as short as it is at the end of the dry season.

Themba, the elephant who likes to rub the itch out of his behind against my trunk couldn’t decide whether he was put out or not. The hippos didn’t care too much – there was still enough grass for them. No one else seemed to notice.

Today things really began popping around here. Vehicles arrived, people fiddled around the trunk of my sister, suspending tables from her branches. Chairs were brought and set up on the cleared earth.

Soon vehicles arrived, filled with people, who they left with us. Now the lush African bush glimmered in the mid-afternoon sun, the sky clear and domed over all. An air of expectancy hung over the small gathering, milling around the clearing, protected by our shade.

I love being fanciful, but now I will take back the narrative. For once in this pristine environment where they normally rule, the animals gave way, seeming to understand that this was not their time to parade – it was Dwayne and Maike’s turn to be on show.

I had visited the site with Dwayne earlier in the week to make sure all was as it should be. The staff of Mogothlo Camp had cleared it beautifully: a dusty aisle leading from a small, multi-stemmed bush, to the altar canopied by the entwined leaves of a Leadwood and Shepherd’s Bush tree. Another small pathway led to a second Leadwood, old and gnarled, not many leaves left, where drinks would be placed for guests as they waited for the vehicles to bring everyone from the camp. 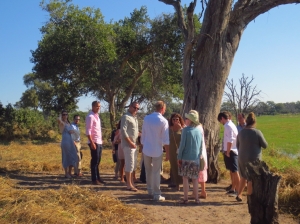 The river was fuller than anyone remembered it being for a long time, with parts of the road underwater, much to the glee of Sylvie and Ben, my grandchildren, who had never been in a car that went swimming before. Everyone was assembled, the drinks had refreshed and people began to take their seats.

Dwayne handed me his glasses. A few minutes later he asked for them back again.

Mark and Darron had sorted out the music, the hi-fi camouflaged at the base of the small bush, that would also screen the bridal car when it arrived. It was a game vehicle, and no one needed to see how Maike would get out of it in her wedding dress!

“There are bones under that tree,” Mark said quietly.

“Hopefully that means the lions have eaten,” I answered.

Sound carries in the still of the bush, and we heard the Game Vehicle long before it came into view. 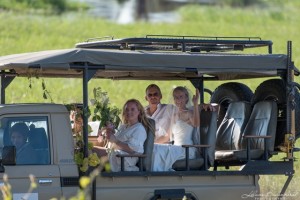 It is translucent in the oblique rays of the sun. Maike is bathed in a soft glow: she looks like a Princess! She smiles, and waves. We all cheer, not too loudly. The Leadwood tree is caked with mud deposited by an elephant as he daily rubs his rump, and we are not sure what time this ritual takes place, or how irate he might be at having his space invaded.

The vehicle comes to a stop behind the bush. There is a rustle. Mark takes his daughter to meet the bride. Sylvie is the perfect flower girl dressed in a lovely, lacy, lay 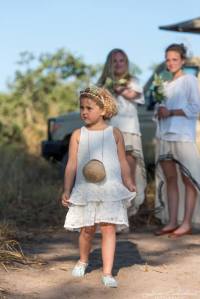 ered dress, as she leads the retinue down the dusty path, strewing bougainvillea petals before her. Dwayne gives me back his glasses as Pastor Chris summonses him. His brother stands next to him.

Maike is assured, only her eyes seeking the approbation of her groom give a hint of her nervousness. Her dad, Stefan is tall and proud as he leads her to her future. The ceremony begins. It is simple, full of love and joy. As the sun begins to reach for the horizon it catches the diamantes in Maike’s veil and she is silhouetted in a halo of light. The vows are 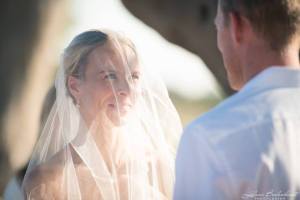 spoken, the register is signed, the paperwork completed.

Pastor Chris turns them to face each other.

“By the power invested in me as a minister of Jesus Christ, and the Republic of Botswana, I declare you man and wife, and I present to you Mr and Mrs Elderkin. Dwayne, now you may kiss your bride.”

Sylvie turns to me and exclaims: “They are like us! We are also Elderkin.”

With that the gathering surges around them and shows them with rose petal confetti. Congratulations resound in the golden air. The photographer, Lilani, allows us time, and then begins to organise everyone for the shots that will be so important later on. 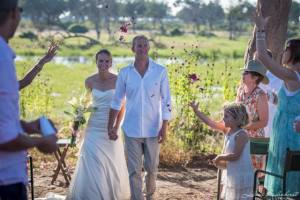 The guests are taken off to a spot further upriver for sundowners while the family photographs are taken. Soon, we too, are carried off to join the rest of the party, leaving Dwayne and Maike with Lilani. The first thing I see when we join the rest of the group is a restless pod of indignant hippos in the pool, unsure of this intrusion into their space. Kim, the Manager of the group is anxious, concerned for the safety of all as one hippo keeps standing up out of the water, looking quite menacing.

“Keep the children behind us, as far from the water as possible,” she tells me.

But I think there iss safety in numbers, and the hippo soon settled back into the water in

a happy huff, staring balefully at us as we enjoyed canapés and whatever on the bank.

All too soon it is time to return to camp and the wedding feast. The boma looks amazing. Stefan had painstakingly ringed the area with strings of tiny led lights that twinkle like a profusion of stars. Tilley lamps and candles cast a soft glow over tables bedecked in white and green. Ramona, Maike’s mum, had handcrafted white butterflies which seemed to hover over the tables as they perch on wine glasses. Closer inspection reveal they carry our names on their wings. 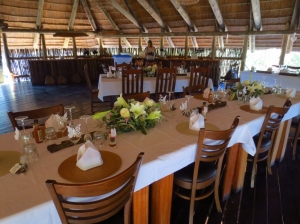 Conversation swirls, sparks from the fire outside rise star-wards as we wait for the newlyweds. Soon they arrive to a fanfare of bubble blowing, and the evening begins.

2 thoughts on “The Wedding on the Banks of River Khwai”